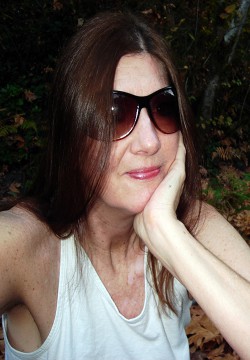 LOREE HARRELL BIO
Sometimes you can draw a perimeter around a thing and what falls inside is enough.  I have lived all of this life in a thirty mile radius of where I sit right now.  Thirty miles to the east, thirty miles to the south, thirty miles to the west.  Most of the all of the days spent within ten miles of right now.  While not unaware or uninterested in what lies beyond, this is where I live, and what forms and feeds my art and my words.
There was a river - there is a river - and a studio in an old school on the side of a road.  There was a tiny house on a scenic highway, much-loved dogs and trees and two more rivers, and, in the background of it all, one fine mountain.  These were what defined, informed, surrounded, held.
In 1994, securely ensconced in a corporate job, a series of fortuities led me to a beautiful log house on a sweet spot of the Sandy River.   Two days after moving in, I knew the river and the job couldn't exist in the same space.  The river won. I tendered my resignation, cashed out the profit sharing, and went to the river to write.  One year later, almost to the day, I received word that Body Speaking Words would be published in the spring.
In 2000, a writing studio in a classroom in the old Springdale School birthed the next step.  One day, in the lull of a story, I was scribbling to get hand and brain moving together, and saw a glimmer in the scrawl that seemed like it was maybe Something.  The art took over from there like it had just been waiting in the background to be noticed.  For the next four years, fifty to a hundred hours a week were spent immersed in ink and oil and acrylic and canvas and paper.
There was a move of home and loss of studio at the end of 2004, followed by a year of casting about for a voice for the art in the much diminished available space of the home studio.  With just a whisper of 2005 left, I put woodstain on paper and knew I had found my medium of choice, completing over a hundred paintings in the following four years.
There were the daily hikes to the woods and river with the dogs - the pack having grown from one to two to four - always with a camera if it wasn't mid-downpour, and then, when the camera smashed on the rocky river beach, with the cell phone, trying to capture  glimpses of the delight and peace of those walks.  The Mirror Project is my attempt to discover a part of that story, to show a bit of the magic that lives unseen in the middle of life.
My work is, in the most literal sense, leading.  From inception and through each incarnation, the next thing to be done has revealed itself, always unexpectedly, as a new trail to explore. My job is step to step to step and some days you arrive in a place.
Inside the perimeter of a thing. 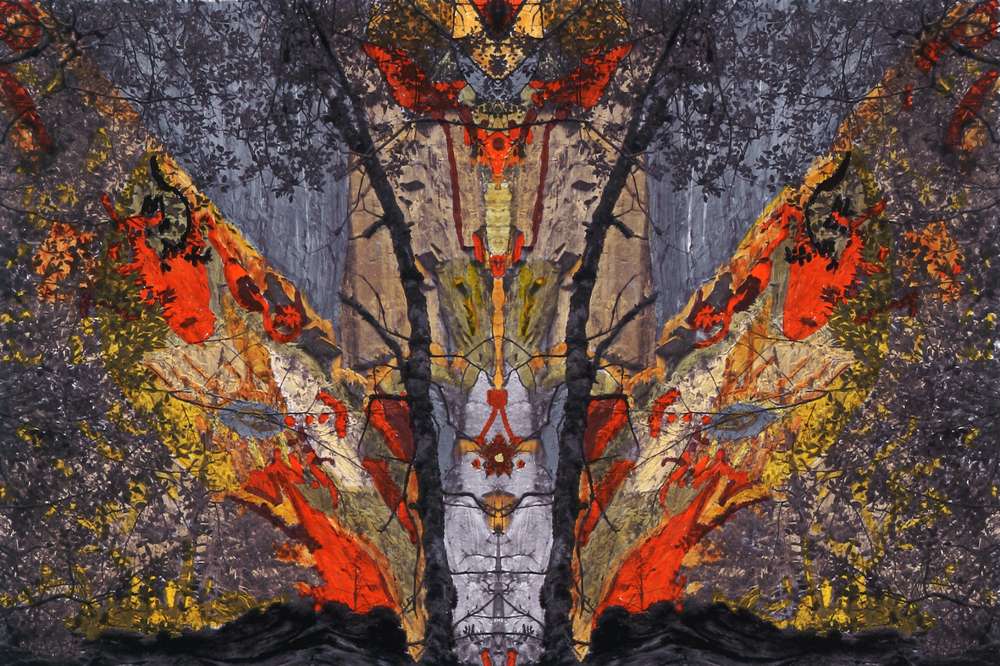 THE ENVIRONS PROJECT WAS BIRTHED IN THE CONJUNCTION OF THE MIRROR PROJECT AND THE COLOR PROJECT.

THE ORIGINAL MIRROR IMAGE IS SHIFTED TO GRAYSCALE, AND PRINTED ON PREMIUM MATTE ART PAPER,

THEN HAND COLORED WITH WOODSTAIN AND INK TO SEE WHAT SHOWS UP THAT HASN’T BEEN SEEN BEFORE.

The Mirror Project is a photographic exploration of what is hidden just outside of our sight behind the trees, between the rocks, under the rivers, beside the oceans, over the mountains. The Mirrors are not about the reflection of self in other, but rather about the reflection of self in self, the joining of halves, the discovery of what is hidden in the conjunctions. - Loree Harrell 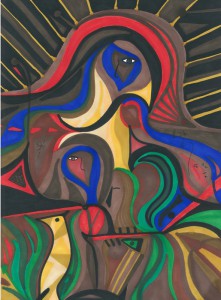 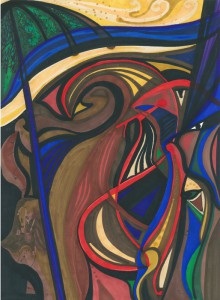 Inception 2005
The woodstain painting is my ease, and my continued  practice in the medium reflects my belief  that this work is the core of what I am here to communicate.  The hidden things are most clearly here. 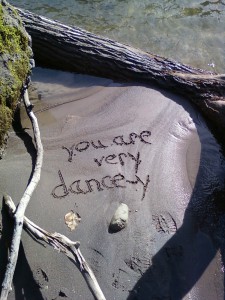 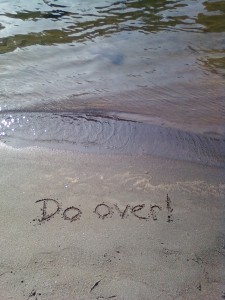 Inception 2007
Ongoing project with no targeted end date, currently consisting of over 200 images.  This project combines words and image, worked on site on the Sandy River, Corbett, Oregon.
Each installation recorded photographically, then left to the river to wash away. 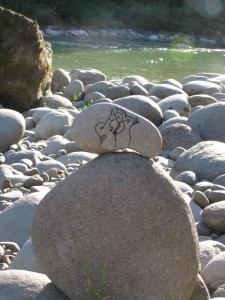 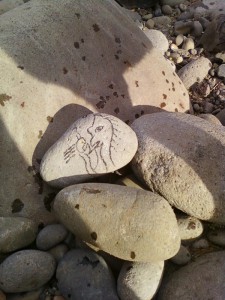 Active May 2010 through present

Found Art project, worked on site on beach at the Sandy River.  Charcoal on rock - larger stones left on display, smaller worked and then turned upside down to be discovered by others accidentally.  Each placement recorded photographically, then left to the elements to fade back from existence.